Amplifier and DSP in one package

Two keys to unlocking great sound in a car stereo system are serious power and extensive control — and this amp's got them both. For power, AudioControl's D-6.1200 6-channel amplifier generates 125 watts RMS per channel — 200 watts per channel at 2 ohms — so it'll drive even the most demanding aftermarket speakers with plenty of headroom to spare.

Whatever the job, this amp is ready

You can also use the D-6.1200 to power a pair of 2-way components with four of its channels, while delivering 400 watts RMS to a subwoofer from its 5th and 6th channels bridged together. Or, if you're into pure bass power, you can put this amp in 3-channel mode to power three subs with 400 watts RMS each, 1200 watts RMS total. 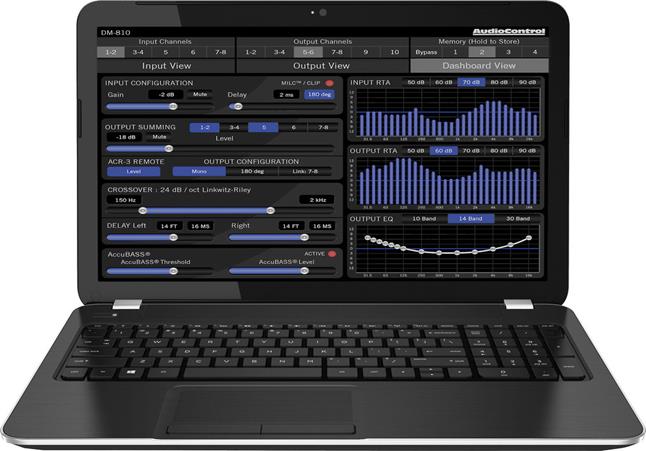 You won't find any knobs on the D-6.1200 — you make adjustments and save settings via your laptop (PC or Mac). AudioControl's Smart-User DSP software package includes 12 or 24 dB/octave Linkwitz-Riley crossovers, 30-band equalizers, parametric filters, time delay/alignment for inputs and outputs, phase correction, AccuBass™ bass correction, and real-time analyzers (RTA) for the inputs and outputs so you can visually confirm the improvements in the sound.

It's made to work with a factory radio

Eight active speaker-level inputs allow you to connect this amp to almost any factory system, even ones that have separate pre-filtered, time-aligned, and amplified signals going to separate factory speakers and tweeters. The D-6.1200 sums them into one smooth, unified signal for you to balance, align, and tune for your high-performance speakers. AudioControl's Great Turn On (GTO™) signal-sensing circuitry turns the amp on automatically whenever it senses an incoming signal, so you won't have to run a separate turn-on lead back to the receiver.

Onboard LEDs indicate optimized signal flow for inputs and outputs, plus give you a warning when a source is too loud and causing distortion. An optional ACR-3 wired remote controller lets you select sources, control levels, and recall presets from your front seat. An optional Bluetooth® adapter lets you stream music and control the digital processing wirelessly from your compatible portable device.

What's in the box:

We have a 7-day return policy, which means you have 7 days after receiving your item to request a return.

To be eligible for a return, your item must be in the same condition that you received it, unworn or unused, with tags, and in its original packaging. You’ll also need the receipt or proof of purchase.

To start a return, you can contact us at streetdreamzteam@gmail.com. If your return is accepted, we’ll send you instructions on how and where to send your package. Items sent back to us without first requesting a return will not be accepted.

You can always contact us for any return question at streetdreamzteam@gmail.com.


Damages and issues
Please inspect your order upon reception and contact us immediately if the item is defective, damaged or if you receive the wrong item, so that we can evaluate the issue and make it right.


Exceptions / non-returnable items
Certain types of items cannot be returned as custom products (such as special orders or personalized products, Custom Off-road orders), used or damaged products, and sale items. Please get in touch if you have questions or concerns about your specific item.


Exchanges
The fastest way to ensure you get what you want is to return the item you have, and once the return is accepted, make a separate purchase for the new item.


Refunds
We will notify you once we’ve received and inspected your return, and let you know if the refund was approved or not. If approved, you’ll be automatically refunded on your original payment method. Please remember it can take some time for your bank or credit card company to process and post the refund too.